The River and the Sea

The River and the Sea

When everyone tells a different story, how do we tell the truth?

The original trailer for The River and the Sea.

The River and the Sea follows the journey of David, a young Jewish American man who travels to Israel/Palestine on a Birthright trip, inspired by his dying grandfather, who always wanted to see the country but never could. He interviews everyone he meets: from a young soldier in Tel Aviv to a young mother from Gaza, a Holocaust survivor to a Sudanese refugee. As the reality of the situation becomes sobering clear, and he is increasingly implicated in a conflict he only set out to document, David is forced to come to terms with his own fears and biases and finally take a stand. Based on a true story and written using the real words of people interviewed by the playwright all over Israel/Palestine in 2012-2013, “The River and the Sea” challenges our notions of history, identity, and belonging.

The River and the Sea was developed with the support of 150 donors, and a two-year residency at New Repertory Theatre in Watertown, MA. 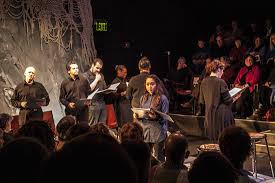 From Moriel Rothman, activist, poet and author, “The Leftern Wall”